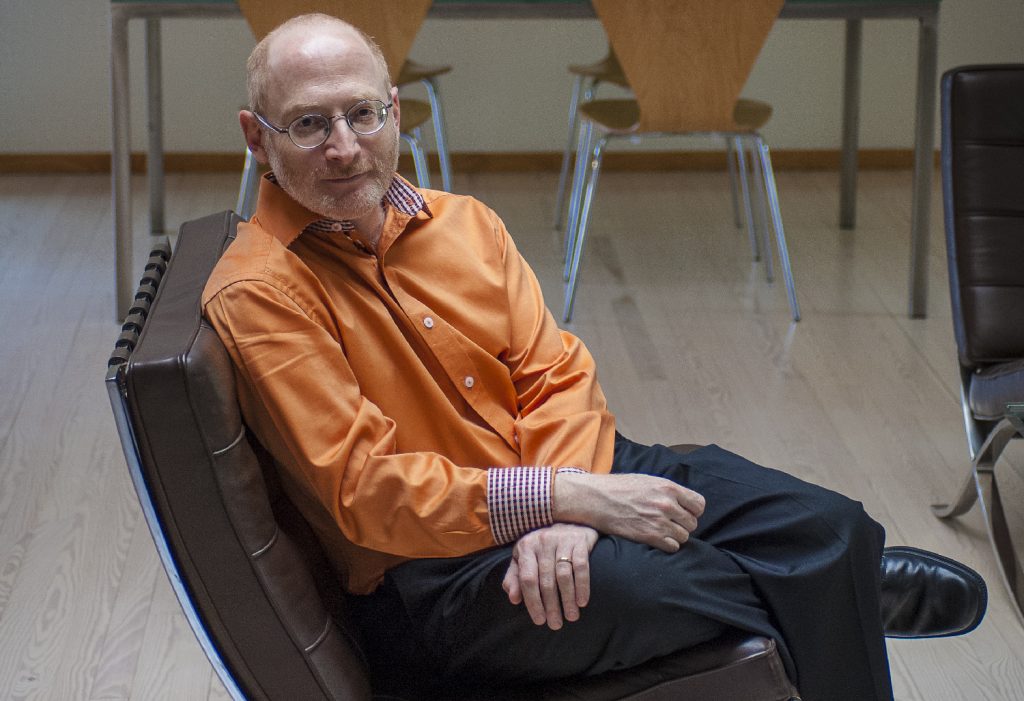 Pulitzer Prize and Grammy-Award winning composer AARON JAY KERNIS draws artistic inspiration from a vast and often surprising palette of sources, among them the limitless color spectrum and immense emotional tangle of the orchestra, cantorial music in its beauty and dark intensity, the roiling drama of world events, and the energy and drive of jazz and popular music. All are woven into the tapestry of a musical language of rich lyric splendor, vivid poetic imagery, and fierce instrumental brilliance, and he has been praised for his “fearless originality [and] powerful voice” (The New York Times).

Among the most esteemed musical figures of his generation, he is dedicated to creating music which can be meaningful to other people’s lives, and extend communication among us to make an emotional connection with listeners – while frequently challenging audiences and performers alike. That connection has brought his music to major musical stages world-wide, performed and commissioned by many of America‘s foremost artists, including sopranos Renee Fleming and Dawn Upshaw, violinists Joshua Bell, Pamela Frank, Nadja Salerno-Sonnenberg and James Ehnes, for whom he wrote is Grammy Award-winning violin concerto,  pianist Christopher O’Riley and guitarist Sharon Isbin, and such musical institutions as the New York Philharmonic, Philadelphia Orchestra (for the inauguration of its new home at the Kimmel Center), Walt Disney Company, Rose Center for Earth and Space at New York’s American Museum of Natural History, The Knights, Ravinia Festival , San Francisco, Melbourne, Dallas, Toronto, London, and Singapore Symphonies,  London Philharmonic, Lincoln Center Great Performers Series, Minnesota and Royal Scottish National Orchestras, American Public Radio; Orpheus, Los Angeles and Saint Paul Chamber Orchestras, Aspen Music Festival, beyond. Recent commissions include his 4th Symphony for the New England Conservatory (for its 150th anniversary), Bellingham Festival, and Nashville Symphony, which recorded it; concerti for cellist Joshua Roman, violist Paul Neubauer, flutist Marina Piccinini; a quartet for the Borromeo String Quartet; a series of works for Tippet Rise Art Center; a horn concerto for the Royal Liverpool Orchestra and Grant Park Music Festival.

One of America’s most honored composers, he won Northwestern’s Nemmers Award (2011) and was inducted in to the Classical Music Hall of Fame.  A member of the American Academy of Arts and Letters, he received the coveted Grawemeyer Award in Music Composition (2002) for the cello and orchestra version of “Colored Field”; the 1998 Pulitzer Prize for his String Quartet No. 2 (“musica instrumentalis”). He has also been awarded the Stoeger Prize from the Chamber Music Society of Lincoln Center, a Guggenheim Fellowship, the Rome Prize, an NEA grant, a Bearns Prize, and a  New York Foundation for the Arts Award. He is the Workshop Director of the Nashville Symphony Composer Lab, and for 11 years, served as New Music Adviser to the Minnesota Orchestra, with which he co-founded and directed its Composer Institute for 15 years.

His works have been recorded on Nonesuch, Koch, Naxos, Signum, Virgin and Argo, with which Mr. Kernis had an exclusive recording contract. Previously issued CDs include a widely acclaimed album with Hugh Wolff conducting the City of Birmingham Symphony Orchestra in his Symphony No. 2, “Invisible Mosaic III,” and “musica celestis” was nominated for a Grammy, and won France’s Diapason d’or Palmares for Best Contemporary Music Disc of the Year. Other recordings include a disc of his Pulitzer-Prize winning String Quartet No. 2 (“musica instrumentalis”) and Musica Celestis, both on Arabesque with the Lark Quartet; works for violinists Pamela Frank and Joshua Bell with David Zinman and the Minnesota Orchestra, and his Double Concerto with guitarist Sharon Isbin, violinist Cho-Liang Lin and Hugh Wolff leading the Saint Paul Chamber Orchestra. Originally released on Virgin/EMI was his cello version of “Colored Field” and “Air,” created for the Norwegian virtuoso Truls Mork and the Minnesota Orchestra with Eiji Oue. Several of his important works recorded on Argo have been re-released by Phoenix, including his Second Symphony, “Musica Celestis” for String Orchestra, “Invisible Moasic III, and “Symphony in Waves,” with Gerard Schwarz and the New York Chamber Symphony. Other critically acclaimed recordings include his “Goblin Market,” and “Invisible Mosaic II,” on the Signum label with The New Professionals, Rebecca Miller conductor, and Mary King narrator;  “Three Flavors,” featuring pianist Andrew Russo, violinist James Ehnes and the Albany Symphony under David Alan Miller’s direction, and a disc of his solo and chamber music, “On Distant Shores,” (Phoenix);  vocal music with soprano Talise Travigne and the Albany Symphony; his third string quartet (“River”) as part of The Kernis Project, a complete cycle of his quartets with the Jasper Quartet, and a concerti disc with cellist Joshua Roman and violist Paul Neubauer with conductor Rebecca Miller (Signum) and a disc of his flute concerto and Air for flute and orchestra with Marina Piccinini with Leonard Slatkin/Marin Alsop and the Peabody Symphony.

Kernis first came to national attention in 1983 with the acclaimed premiere of his first orchestral work, “dream of the morning sky,” by the New York Philharmonic at its Horizons Festival. He was born in Philadelphia on January 15, 1960 and began his musical studies on the violin; at age 12 he began teaching himself piano and, the following year, composition. He attended the San Francisco Conservatory of Music, and Manhattan and Yale Schools of Music. Leta Miller’s book-length portrait of Kernis and his work was published in 2014 by University of Illinois Press as part of its American Composer series. He has taught composition at Yale School of Music since 2003.