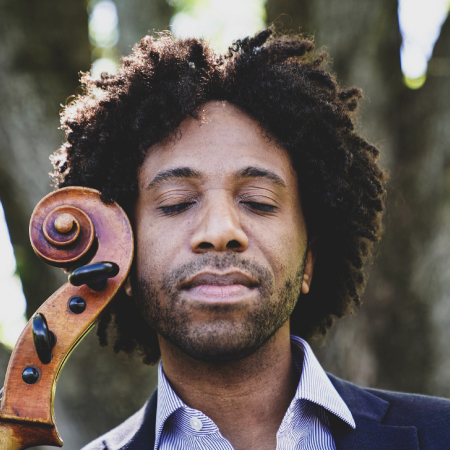 Hailed by The Guardian as “a cellist of power and grace” who possesses “mature artistry and willingness to go to the brink,” cellist Seth Parker Woods has established a reputation as a versatile artist straddling several genres. In addition to solo performances, he has appeared with the Ictus Ensemble (Brussels, BE), Ensemble L’Arsenale (IT), zone Experimental (CH), Basel Sinfonietta (CH), New York City Ballet, Ensemble LPR, Orchestra of St. Luke’s, and the Seattle Symphony. A fierce advocate for contemporary arts, Woods has collaborated and worked with a wide range of artists ranging from the likes of Louis Andriessen, Elliott Carter, Heinz Holliger, G. F. Haas, Helmut Lachenmann, Klaus Lang, and Peter Eötvos to Peter Gabriel, Sting, Lou Reed, Dame Shirley Bassey, and Rachael Yamagata to such visual artists as Ron Athey, Vanessa Beecroft, Jack Early, Adam Pendleton, and Aldo Tambellini.

In the 2020-21 concert season, Woods will make debuts at EMPAC, The Strathmore, LACMA in Los Angeles and the Spoleto Festival. This season of performances will also include premiere performances of concertos by Tyshawn Sorey with the Seattle and Atlanta Symphony’s (David Robertson and Maxim Emelyanychev, conductors), and the late Fausto Romitelli with John Kennedy and the Spoleto Festival Orchestra. Woods will serve as the new 2020-21 Artist in Residence for the Kaufman Music Center in New York City, as well as guest artist at the Juilliard School, University of Iowa, University of Vancouver, Stanford University, Boston Conservatory, Ammerman Center for Arts and Technology at Connecticut College and Northwestern University – Center for New Music.

His debut solo album, asinglewordisnotenough (Confront Recordings-London), has garnered great acclaim since its release in November 2016 and has been profiled in The New York Times, Chicago Tribune, LA Times, The Guardian, 5against4, I Care If You Listen, Musical America, Seattle Times, and Strings Magazine, amongst others.

Woods serves on the performance faculty at the University of Chicago as a Lecturer/Artist in Residence for Cello and Chamber Music. He previously served on the music faculties of Dartmouth College and the Chicago Academy of the Arts, and holds degrees from Brooklyn College, Musik Academie der Stadt Basel, and a PhD from the University of Huddersfield. At present, he is the Artist in Residence with the Kaufman Music Center, and former AiR with Seattle Symphony and the interactive concert hall, Octave 9: Raisbeck Music Center.