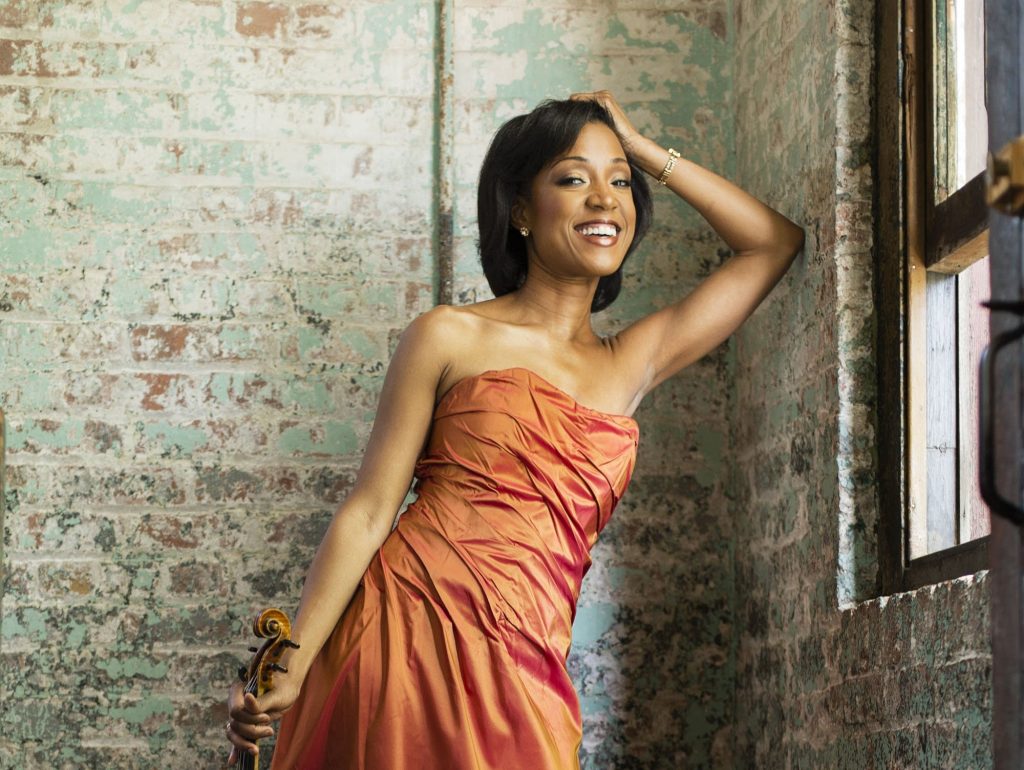 Acclaimed by The New York Times as “the versatile violinist who makes the music come alive” and as a 2017 The New York Times “New Yorker of the Year,” for her “tonal mastery” (BBC Music Magazine) and “Groundbreaking” recording projects (Strings Magazine), and featured in the Smithsonian Museum of African- American History, violinist Kelly Hall-Tompkins is trailblazing an innovative, creative and entrepreneurial career as a soloist and chamber musician. Winner of a Naumburg International Violin Competition Honorarium Prize, Concert Artists Guild Career Grant, and Sphinx Medal of Excellence, Ms. Hall-Tompkins has appeared as soloist as the Inaugural Artist in Residence with the Cincinnati Symphony and with orchestras including the Dallas Symphony, Oakland Symphony, Jacksonville Symphony, Tulsa Philharmonic, Greenville Symphony, Chamber Orchestra of New York, Gateways Music Festival, for the Manhattan School Centennial Gala at Carnegie Hall with co-soloist Glenn Dicterow, under the baton of Leonard Slatkin, and a Brevard Festival Orchestra under the baton of Keith Lockhart. Additional concerts and recitals include the cities of Kiev, Ukraine; New York, Washington, Cleveland, Toronto, Chicago, Baltimore, and Greenville, South Carolina, and at festivals in France, Germany and Italy.

For 13 months on Broadway, Ms. Hall-Tompkins was the “Fiddler,” violin soloist, for the Bartlett Sher production of “Fiddler on the Roof,” with numerous solos written especially for her. The New York Times hailed her in a feature article as holding the title role, together with dancer Jesse Kovarsky. Featured as soloist in over 400 Broadway performances, plus a Grammy-nominated cast album alongside a bonus track by Itzhak Perlman, Ms. Hall-Tompkins has been the featured subject on NBC’s Today Show with Harry Smith, NBC 4 New York with Janice Huff, NBC 4 at 5, Playbill.com, BroadwayWorld.com, WWFM radio Princeton and Strings Magazine among numerous other major press outlets for her role in Fiddler. Kelly Hall-Tompkins interviews and Kiev performances are also featured in the new documentary on the 50-year history of Fiddler on the Roof, “Fiddler: A Miracle of Miracles.” A significant collaborating partner with violinist/composer Mark O’Connor for five years, Ms. Hall-Tompkins performed his Double Violin Concerto with O’Connor in concerts across the United States. As a passionate chamber musician, Ms. Hall-Tompkins was first violinist of the O’Connor String Quartet, which performed concerts nationally, including Tanglewood, Santa Fe Chamber Music Festival and Lincoln Center’s Great Performer’s Circle, and a member of the Florida-based Ritz Chamber Players, including concerts in residence at Jacksonville’s Times Union Center for the Performing Arts, the Ravinia Festival’s “Rising Stars Series,” New York at Lincoln Center’s Allen Room, and include an upcoming appearance on the Philadelphia Chamber Music Society series. Ms. Hall-Tompkins will perform on Bruce Adolphe’s Off the Hook Festival and has performed at the Garth Newel Music Center, Chamber Music South Dakota, New York City’s Bargemusic, live on WNYC’s “Soundcheck”, at Miami’s Deering Estate Series and for the Raleigh Chamber Music Guild.

Additional performance highlights include as soloist in the 2018 Joyce Theater Ballet Festival with principal dancers of the New York City Ballet, 2016 at the US Supreme Court, and in 2007 Benefit for the Victims of Darfur at Carnegie Hall. Ms. Hall-Tompkins was invited by actress Mia Farrow and conductor George Matthew to perform as soloist before an orchestra comprised of musicians from every major orchestra in the world. In 2002 Hall-Tompkins commissioned a new work for violin and percussion from the German composer Siegfried Matthus, which was premiered at Michigan’s Pine Mountain Music Festival and gave in 2016 with the Oakland East Bay Symphony the US premiere of Professor Matthus’s newest Violin Concerto. Ms. Hall-Tompkins’ performances have been broadcast nationally as co-host of NPR’s Performance Today, in New York by WQXR, by Chicago’s WFMT and live on the BBC.

Ms. Hall-Tompkins’ newest recording project is The Fiddler: Expanding Tradition, featuring for the first time ever a full album of newly commissioned and original Fiddler-inspired works. The full recording was released on Broadway Records in 2018 and acclaimed as “Vital, life-enhancing, glorious…mesmerizing…magnificent” in three reviews, a feature article and cover spot in Fanfare Magazine; two pre-release music videos from the project have already garnered nearly 400,000 views on YouTube. This follows the success of her recent Imagination recording, a double video release of the Ysaÿe Sonata No. 6 and her own jazz arrangement of “Pure Imagination” from the original film Willy Wonka and the Chocolate Factory. The videos, released online and on Collector’s Edition DVD in early 2014, now enjoy over 1,000,000 YouTube views, were featured in Strings Magazine and hailed as “ground-breaking…sumptuous…a potent package” and by Chamber Music America in a public presentation on creating music videos. She released her debut CD recording in 2002, featuring the Kodaly duo, Brahms D minor Sonata and the Ravel Tzigane. Ms. Hall-Tompkins released her second CD, entitled In My Own Voice, in 2008, featuring music by Kreisler, Saint-Saëns, William Grant, and David Baker. The album was praised by Fanfare for its “opulent intensity,” by The Strad, which described Hall-Tompkins’ “winning way,” noting her “mercurial charms [and] genial touch…impressive,” and is featured in the Smithsonian Museum of African-American History.

Regularly tapped as concertmaster, Ms. Hall-Tompkins’ distinguished orchestral career includes a performance on the BBC Proms leading the Chineke! Orchestra, the 2016 Lincoln Center Benefit for the 10 year Anniversary of “Light in the Piazza,” the Biennial Gateways Music Festival, and a 2016 PBS Live from Lincoln Center broadcast with Lang Lang. Ms. Hall-Tompkins’ orchestral career also includes extensive touring in the United States and internationally with the Orpheus Chamber Orchestra, including performances in Carnegie Hall, Lincoln Center, Japan, Singapore, Scotland and a recording with countertenor Andreas Scholl. She also performed over 150 performances with the New York Philharmonic, under conductors including Kurt Masur, Leonard Slatkin, Andre Previn, Charles Dutoit and Valery Gergiev. Ms. Hall-Tompkins has also lead numerous Carnegie Hall concerts with the New York Pops and as founding member of the Chamber Orchestra of New York, which performed its debut concert in Carnegie’s Zankel Hall in the Fall ’07 with Ms. Hall-Tompkins also as soloist. For 13 seasons, she was a member of the New Jersey Symphony Orchestra’s first violin section.

A dedicated humanitarian and social justice in the arts pioneer, Ms. Hall-Tompkins founded and directs Music Kitchen-Food for the Soul, which has, to date, brought over 100 chamber music performances to an estimated 18,000 homeless shelter clients in New York City, Los Angeles, nationwide and in Paris, France, with nearly 200 artists including Emanuel Ax, Glenn Dicterow, Albrecht Mayer, Jeff Ziegler and Rene Marie. Music Kitchen with present a newly commissioned song cycle Forgotten Voices, a world premiere in association with Carnegie Hall in May 2020. Kelly and Music Kitchen have been featured on the NBC Today Show, in The New York Times, on CBSNews.com and ABCNews.com, plus Strings Magazine, Chamber Music America Magazine, Spirituality and Health Magazine, Columbia University Radio and cable’s Hallmark Channel.

Ms. Hall Tompkins received an Honorary Doctorate from the Manhattan School of Music, her alma mater, in 2016, and also delivered the commencement address. She is also one of three 2017 recipients of the Sphinx Medal of Excellence, which was presented at the US Supreme Court by Justice Sotomayor. She earned a Master’s degree from the Manhattan School under the mentorship of Glenn Dicterow, concertmaster of the New York Philharmonic. While there, she was concertmaster of both of the school’s orchestras. Prior to that, she earned a Bachelor of Music degree with honors in violin performance with a minor in French from the Eastman School of Music studying with Charles Castleman. While at Eastman she won the school’s prestigious Performer’s Certificate Competition, several scholarship awards from the New York Philharmonic, and was invited to perform chamber music on the school’s Kilbourn Concert Series with members of the faculty.

An avid polyglot, Ms. Hall-Tompkins studies and speaks eight languages. A native of Greenville, South Carolina, where in 2018 she was inducted into the School District Hall of Fame, Ms. Hall-Tompkins began her violin studies at age nine. She lives in New York City with her husband Joe.