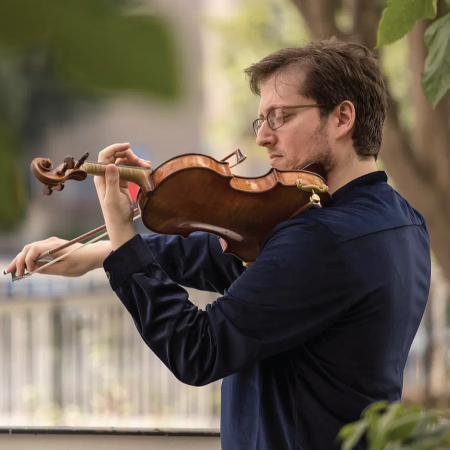 David Radzynski, concertmaster of the Israel Philharmonic, is one of the youngest violinists to lead a major world orchestra today. He works extensively both with the orchestra’s current artistic director Zubin Mehta, and with the newly appointed future artistic director Lahav Shani. David has led the orchestra on tours throughout Europe, China, Singapore, South America, the United States, and in Mehta’s hometown Mumbai, India. He has also performed as guest concertmaster with the Houston Symphony, Pittsburgh Symphony and Cincinnati Symphony Orchestras.

As concertmaster of the IPO, David enjoys collaborating regularly with major conductors and soloists, both in orchestral, solo, and chamber music settings. An avid chamber musician, he has performed with Emanuel Ax, Pinchas Zukerman, Lahav Shani and Martha Argerich, among others.

As a soloist David has most recently played with the Israel Philharmonic and Manfred Honeck performing the Weinberg Violin Concerto. He also performed with Zubin Mehta in Musikverein Hall where he played the Haydn Sinfonia Concertante with his colleagues of the IPO, and in Poland with the Łódź Philharmonic performing the Brahms Double Concerto with principal cellist of the Polish National Philharmonic. David has also played as soloist with the Columbus Symphony and the Amadeus Chamber Orchestra of Poznan where he premiered the double concerto composed by his father Jan Radzynski. He also gives recitals regularly throughout the world.