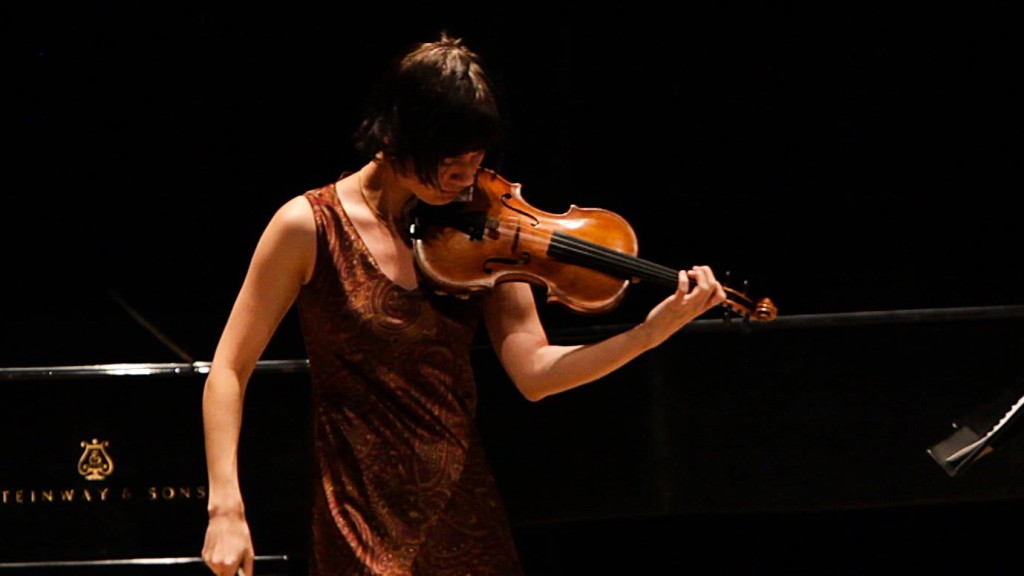 American violinist and violist Miranda Cuckson delights audiences with her expressive playing of a large range of music, from the newest creations to music of older eras. She has in recent years been deeply and widely involved in contemporary music. In demand as a soloist and chamber musician, she is passionate about the creative role of the performer/interpreter in the artistic process and in communicating the music. Downbeat magazine said “violinist Miranda Cuckson reaffirms her standing as one of the most sensitive and electric interpreters of new music.” Her recording of Luigi Nono’s “La lontananza nostalgica utopica futura” for violin and electronics with Christopher Burns (Urlicht AV) was named a Best Recording of 2012 by the New York Times.

Over the past year, she premiered the Violin Concerto No. 2 written for her by Austrian composer Georg Friedrich Haas, at the Suntory Festival with the Tokyo Symphony/Ilan Volkov, with the Staatsorchester Stuttgart/Sylvain Cambreling and the Orchestra of Casa da Música in Porto with Baldur Brönnimann. She also gave the New York premiere of the new Violin Concerto by Michael Hersch, another close friend whose music she has championed for a decade.

In addition to her ongoing engagement with the classical repertoire – including the concerto and sonata repertoire and the solo works of JS Bach – Miranda plays a large number and variety of contemporary works. Composers who have recently written for her include Georg Friedrich Haas, Michael Hersch, Jason Eckardt, George Lewis, Lu Wang, Steve Lehman, Harold Meltzer (Library of Congress commission), Ileana Perez Velasquez and Douglas Boyce. She has collaborated in concert with composer-performers Huang Ruo, Michael Hersch, Vijay Iyer, Nina C. Young, and Philip Glass. She frequently works both with emerging young composers and with a slew of celebrated composers from around the world, including Dutilleux, Carter, Adès, Sciarrino, Boulez, Hyla, Mackey, Crumb, Lachenmann, Saariaho, Davidovsky, Hurel, Ran, Bermel, Wyner, Murail, Wuorinen, Currier, Harbison, and Rzewski. A devoted champion of Ralph Shapey’s music, she curated and played in concerts of his works at Miller Theatre and the Contempo series at the University of Chicago.

Prolific in the recording studio, she has released ten lauded albums. Her 2017 album of music by Wolpe, Carter and Ferneyhough (Urlicht AV) has been praised by Brian Ferneyhough and added to her varied discography. In 2016, ECM Records released her album of Bartók, Schnittke and Lutoslawski duos with pianist Blair McMillen. For her first CD, in 2001, she recorded the Ponce and Korngold concertos with the Czech National Symphony, on Centaur Records. She subsequently was awarded grants from the Copland Fund (four times in a row) to pursue her interest in 20th-century American violin music and record works by Ross Lee Finney, Ralph Shapey and Donald Martino. Her other albums include the Roger Sessions solo Sonata, Elliott Carter Duo and a duo by Jason Eckardt, with Blair McMillen; “the wreckage of flowers”: music by Michael Hersch; and “Melting the Darkness”: microtonal and electronics pieces by Xenakis, Haas, Bianchi, Rowe and more. Her playing is also featured on an array of composers’ albums, including Reiko Füting, Harold Meltzer, Jeffrey Mumford, Anna Weesner, Dai Fujikura and Philip Glass.

She is the founder/director of her non-profit Nunc, a member of NY-based chamber group counter)induction, and an original guest curator at Brooklyn’s National Sawdust.  She has worked with numerous ensembles and groups and was the founding violinist of the Argento Chamber Ensemble, the American Contemporary Music Ensemble (ACME) and Momenta Quartet.

She is continually engaging with many forms of art and is a member of the recently formed artist collective AMOC, founded by Matthew Aucoin and Zack Winokur.  She has performed the Barber Concerto with the New York City Ballet, Stravinsky Duo Concertant at BAM with the State Ballet of Georgia, and Stravinsky Concerto for the Balanchine centennial. In 2019 she was presented by the experimental multimedia Ferus Festival in collaborative new work with composer Katharina Rosenberger and projection designer John Burnett. Her ongoing activities include writing and photography.

Miranda studied at Juilliard, starting in Pre-College when she was nine, through her doctorate (with several years away between her degrees). She was a C.V. Starr Fellow and won Juilliard’s Presser Music Award, and the Richard F. French Prize for her dissertation on Ross Lee Finney. She had a remarkable sequence and variety of teachers including Robert Mann, Dorothy DeLay, Felix Galimir, Shirley Givens, Fred Sherry and the Juilliard Quartet. She teaches at the Mannes School of Music/New School University and at several summer festivals.

Miranda is a US citizen since childhood. Her musician parents are Austrian-English and Taiwanese. Cuckson is pronounced “Cookson”, as in the word to “cook”.

Read more about Miranda in her interviews with April Magazine here and National Sawdust Log here.